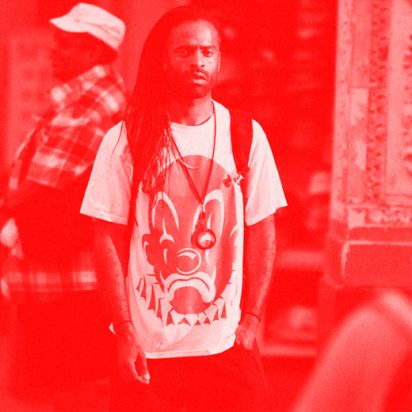 Ashland Mines a.k.a. Total Freedom measures up fully to his stage name. A talent for perfect control of the revolutionary DJ interface Pioneer CDJs joined with a good deal of unbridled improvisation characterise his ultra-energetic, disruptive Shazam-proof sets, whose influences reach far beyond the pale of New York’s resident queer party GHE2T0GH0T1C. Mines elevates DJing into an art form. His unique approach to fragmentation and deconstruction influenced an entire generation of artists – from the likes of Arca and Kingdom to the sonic zeitgeist represented by labels such as NON, Halcyon Veil and PAN. In the end, it funnelled into something people have trouble finding a name for but that is sometimes referred to as ‘post-club’ or ‘deconstructed club music’. Meanwhile, Mines had already taken it a step further. His famous ‘makeshift’, ‘bastardised’ versions of pop hits have even found their way into Björk’s DJ sets. Total Freedom is the antithesis of the tedious linearity of a large portion of contemporary club production. His sets discover parallels between remote, seemingly incompatible musical worlds – Mines’ cues make the coupled terms of ‘mainstream’ and ‘underground’ tumble down like a house of cards.